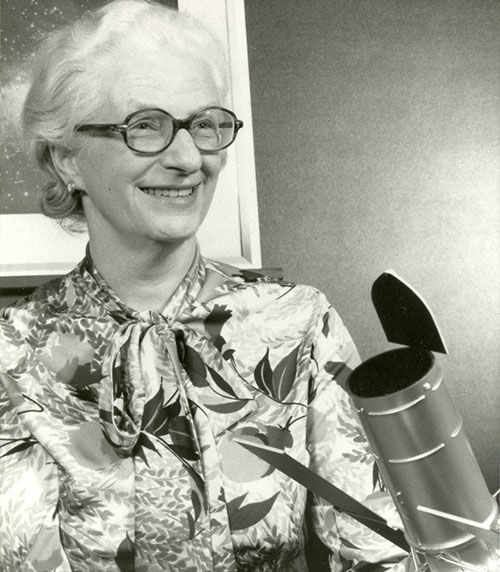 Nancy Grace Roman with a model of the Hubble Space Telescope Credit: NASA

Today, NASA announced that it is naming its next-generation space telescope, the Wide Field Infrared Survey Telescope (WFIRST), in honor of Dr. Nancy Grace Roman, NASA’s first Chief Astronomer, who paved the way for space telescopes focused on the broader universe. The newly named Nancy Grace Roman Space Telescope (or Roman Space Telescope, for short), is set to launch in the mid-2020s.

Dr. Roman is credited with making the Hubble Space Telescope a reality, leading to her nickname “mother of Hubble.” In the mid-1960s, she set up a committee of astronomers and engineers to envision a telescope that could accomplish important scientific goals. She convinced NASA and Congress that it was a priority to launch the most powerful space telescope the world had ever seen. She argued that, for the price of a movie ticket, each American could be given years of scientific discoveries.

Her vision was realized when Hubble launched in 1990. Hubble turned out to be the most scientifically revolutionary space telescope of all time.

STScI and the Roman Space Telescope

“Dr. Nancy Grace Roman was an accomplished scientist and leader, as well as a staunch advocate of Hubble and NASA’s other Great Observatories. We thought of her as a colleague and friend, and were excited to welcome her to the Institute when we celebrated Hubble’s 25th anniversary in 2015,” said STScI Director Kenneth Sembach. “We are honored to be part of her continuing legacy. Our entire team stands ready to support the astronomical community and ensure that the Roman Space Telescope will achieve its full scientific potential.”

All of the data collected by the Roman Space Telescope will be held in the Barbara A. Mikulski Archive for Space Telescopes (MAST) at STScI and made immediately available for any investigation. Astronomers around the world will be able to mine data from these archives to conduct a broad range of studies, greatly increasing the impact of the mission. The observatory will collect an estimated 20 petabytes of data over its planned 5-year mission – the equivalent of a 40,000-year-long song in mp3 format.