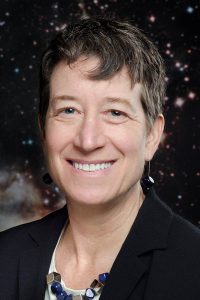 The Association of Universities for Research in Astronomy (AURA) welcomes Dr. Nancy A. Levenson as the Interim Director of Space Telescope Science Institute (STScI). Dr. Levenson will take over from Dr. Ken Sembach.

Matt Mountain, AURA President stated, “AURA will now begin the search for a new permanent Director to lead the Institute through the next phase. In consultation with the AURA Board and NASA, I asked our Deputy Director, Nancy Levenson, to assume the role of Interim Director and was delighted she accepted this responsibility.”

Dr. Levenson has served as deputy director of STScI since 2016. She has been directly engaged in all its missions and was recently part of the NASA Team, which briefed President Biden and Vice President Harris on the first JWST results. She is also a research professor at Johns Hopkins University’s Department of Physics and Astronomy. In her new role, she will provide leadership and vision for all Institute activities and will champion a science-driven approach to support the missions and the communities STScI serves.

Before joining the Institute, Dr. Levenson was the deputy director and head of science at Gemini Observatory, where she worked to make the observatory scientifically productive for the international community. She was previously tenured at the University of Kentucky in the Department of Physics and Astronomy. She started her career as a postdoctoral fellow at Johns Hopkins University and as a postdoctoral researcher at the University of California, Berkeley.

“STScI is a special organization with unique strengths and capabilities,” commented Dr. Levenson. “Stepping into the role of Interim Director is a privilege. I look forward to building on the existing base of scientific, technical, and broad operational excellence as we create our future. Matt Mountain and I will be holding an STScI all hands meeting in the early part of the week of August 22 to discuss this transition.”

AURA is deeply grateful to Dr. Sembach for his leadership and looks forward to his continuing contributions to AURA and the Institute as a member of the science staff.

© 2022 Association of Universities for Research in Astronomy
We use cookies to ensure that we give you the best experience on our website. If you continue to use this site we will assume that you are happy with it.Ok