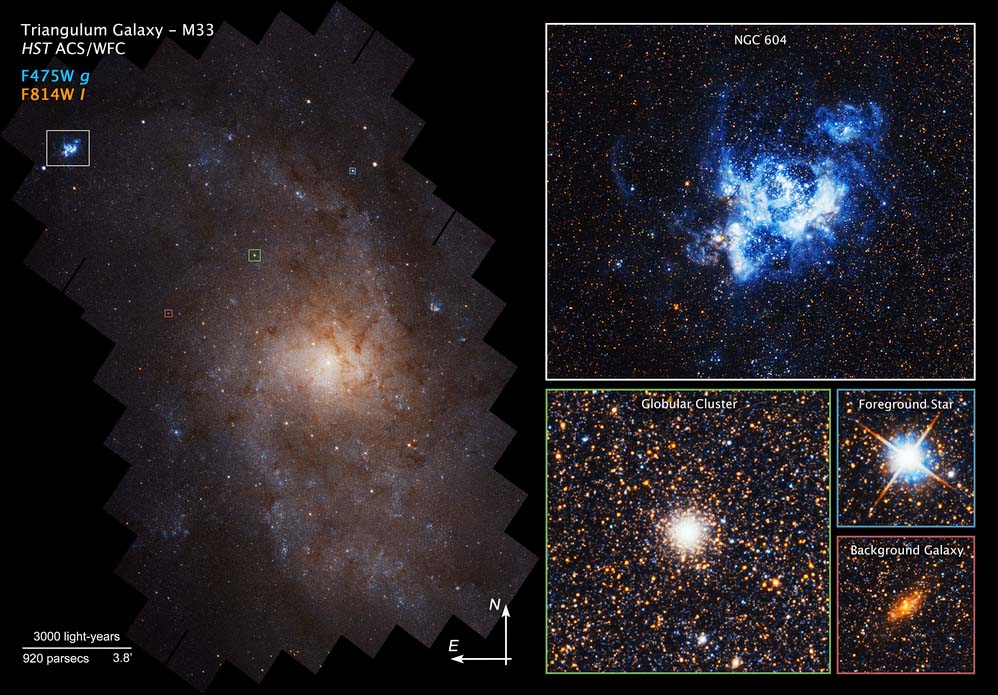 While the Triangulum galaxy (M33) has led a quiet life compared to other massive galaxies, it still contains evidence of a rich “inner life.” This collage zooms into several areas of the larger mosaic, highlighting the amazing details that NASA’s Hubble Space Telescope reveals. Almost every dot of light is a star, with occasional dense clusters of stars, or even rare background galaxies shining through. Credits: NASA, ESA, and M. Durbin, J. Dalcanton, and B.F. Williams (University of Washington)

NASA’s Hubble Space Telescope has produced this stunningly detailed portrait of the Triangulum galaxy (M33), displaying a full spiral face aglow with the light of nearly 25 million individually resolved stars. It is the largest high-resolution mosaic image of Triangulum ever assembled, composed of 54 Hubble fields of view spanning an area more than 19,000 light-years across.

The Local Group of galaxies is dominated by the Milky Way, Andromeda, and Triangulum. As the junior member of this trio of spiral galaxies, Triangulum provides the valuable comparisons and contrasts that only a close companion can. Most notably, Triangulum’s star formation is 10 times more intense than in the comparable Hubble panorama of the neighboring Andromeda galaxy. Astronomers have only begun to mine the enormous amount of data generated by these new Hubble observations, and expect they will yield important insights into the effects of such vigorous star formation.